When a local nobleman (Herbert) is found dead, his body completely drained of blood, the villagers are certain that the vampires Count Mora (Lugosi) and his daughter Luna (Borland) have returned to spread more evil. However, Police Inspector Neumann (Atwill) refuses to believe in such superstitious nonsense as vampires--it IS after all 1935--and he searches for a more down-to-earth culprit. But when the nobleman's daugther (Allen) and her fiance (Wadsworth) come under attack, and the vampires being to menace the home of Baron Zinden (Hersholt), Neumann has to reconsider his sceptical ways and joins forces with the Baron and occult expert Professor Zelin (Barrymore) to destroy the vampires. 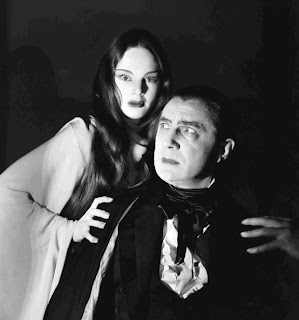 The actors here all to a good job, and the sets and lighting are all well-done. Although Lugosi has top-billing here, he really doesn't do much. He has a nice transformation scene after which he chases some terrified servants down a hallway, and his closing scene is hilariously self-referential, but otherwise all he does is stand around and grimmace. Borland even gets to be scarier than Lugosi.

The overall story isn't anything surprising, even by 1935 standards, but the final-act twist was not one that I saw coming. Its presence was welcomed, and it actually made the movie far more entertaining for me. I would have liked to have gotten a bit more background on the Moras--why does the Count have a bullet wound in his head?--but that may have overburdened the simple story that is already having to bear the above-mentioned twist.

(Speaking of that twist, it probably wasn't all that surprising to the audiences in 1935. It was standard in those days to provide down-to-earth explanations of anything that appeared supernatural in a film. The Lugosi-starring and Browning-directed "Dracula" from 1931 was the first movie to break that standard.)

"Mark of the Vampire" isn't the greatest of the 1930s thrillers, but it's still worthwhile viewing. And it's one of the six movies included in the "Hollywood Legends of Horror" DVD collection, which does include several must-see classics like The Mask of Fu Manchu and Mad Love.