It's Voodoo love for Lugosi

When Haitian plantation owner Charles Beaumont (Frazer) becomes obsessed with the beautiful Madeleine (Bellamy), he invites her and her husband-to-be (Harron) to have their marriage and spend their honeymoon at his plantation. When he fails to win Madeleine's heart, he turns to his neighbor, 'Murder' Legendre (Lugosi) and asks him to use his powers to create zombies to recreate Madeleine as his love slave. Will Madeleine's fiance and the local priest (Cawthorn) unmask Legendre's evil and save Madeleine from a fate worse than death, or will they merely become yet another pair of zombies in Legendre's growing force of mindless slaves? 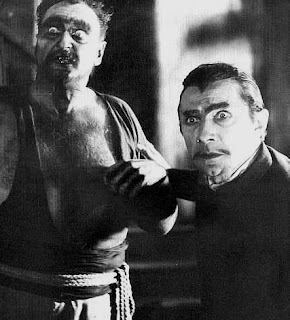 "White Zombie" has been described as the first zombie movie ever made. I don't know if this is true or not, but it is definately one of the best. It predates the flesh-eating blood-spattered cannibal zombies of George Romero, but instead relies upon traditional zombie myths and tales of dark sorcery to generate its chills. It's a stylishly filmed movie that features creepy performances by Lugosi and Bellamy, and scenes that drip with creepiness, as Legendre's mindless slaves work his sugar mills, and as a ghostly, zombie-fied Madeleine glides silently through the vaulted halls of Legendre' house. (The height of creepiness is reached when the depth of Legendre's evil is fully revealed and he gradually starts turning Charles Beaumont into a zombie as well.)

"White Zombie" is a must-see for fans of classic horror movies in general, and fans of zombie movies in particular. It is the one of the roots from which the horror genre sprang. Heck, the film should be required viewing for anyone who is currently making horror movies... if filmmakers chose to emulate a work like this, maybe we'd have more decent horror movies coming out.